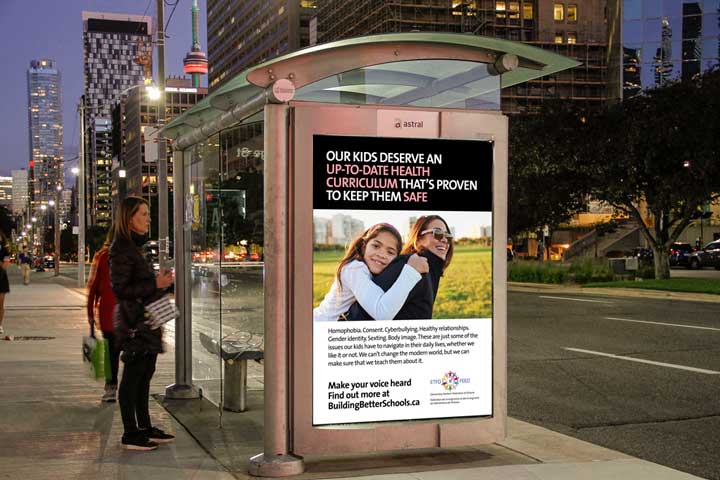 ETFO purchased newspaper and transit-shelter advertising last August and September to make the public aware of changes to the sex-education curriculum.

The Ontario Divisional Court decision on ETFO’s challenge of the Ford government’s new sex-education curriculum gave teachers an important victory by establishing that teachers and schools are required, under the Education Act and the Ontario Human Rights Code, “to be inclusive, tolerant and respect diversity.”

The decision means that teachers and schools can go beyond the 2010 curriculum (which includes a section on sex education written in 1998) revived by the Ford government to replace the one instituted by the Liberals in 2015.

“The 2010 curriculum contains no provision preventing teachers from addressing the topics of consent, use of proper names to describe body parts, gender identity and sexual orientation, online behaviour and cyberbullying, sexually transmitted disease or infections, in the elementary school classroom,” the judges wrote in their decision.

The court decision contained an indirect rebuke to Premier Doug Ford, who had threatened teachers last August, saying he would punish teachers who didn’t follow the old curriculum. The court called such public statements “ill-considered.”

“ETFO took a principled position to stop the unprecedented and unnecessary attack on kids and professional educators in Ontario,” said ETFO President Sam Hammond in an ETFO media release. “The government’s explicit concession on this point in court makes this case a victory for ETFO and others. I have no doubt that such a concession would never have occurred without litigation.”

For more information on the decision, please read articles from the Canadian Press (published in the National Post) and The Globe and Mail.

“This is a win, and teachers need to understand that we accomplished it with this litigation; that (the ruling) helps protect the rights of teachers to exercise professional judgment and free expression,” said Gangaram in an interview with the Hamilton Spectator.

“The court’s decision is clarifying; it allows us to teach things that benefit students, without fear of reprisals, and to deliver the curriculum in a meaningful, robust and fearless way.”