ETFO provides members with collective bargaining information in many different ways, including:

Not Receiving Calls from ETFO?

If you are not receiving phone calls from ETFO related to central bargaining from time to time, then it’s possible ETFO doesn’t have your current home address on file.

To update your telephone number, contact ETFO’s Member Records Department at memberrecords@etfo.org.  In your email, please include your ETFO Member ID Number, as well as the contact information you would like to have updated.

If you don’t receive ETFO’s Collective Bargaining eNewsletter, then one of two things are possible: 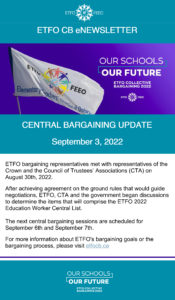 If you are not receiving the CB eNewsletter, please determine which of the following two situations applies to you:

1. I used to receive ETFO’s CB eNewsletter, but I no longer receive it.

It is likely that you unsubscribed from ETFO’s eNewsletters at some point. Due to Canadian anti-spam laws, you must re-subscribe to one of our public eNewsletter lists before we can add you back to the member-only email list we use to send information about bargaining, benefits, etc. Email member records at memberrecords@etfo.org and they will send you a link to re-subscribe.

ETFO probably doesn’t have a current email address on file for you.

Contact ETFO’s Member Records Department at memberrecords@etfo.org. In your email, please include your ETFO Member ID Number, as well as the information you would like to have updated.

Click here and send a request to join: https://www.facebook.com/groups/ETFOCB/

Not Receiving Correspondence at Home from ETFO?

If you haven’t received the fall 2022 issue of ETFO’s magazine, Voice, then it’s likely we don’t have your current home address on file. 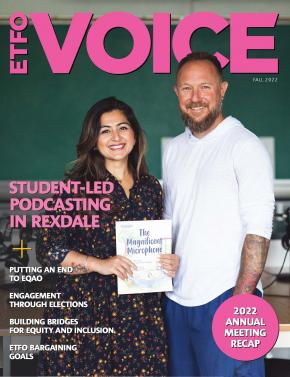 To update your address, contact ETFO’s Member Records Department at memberrecords@etfo.org. In your email, please include your ETFO Member ID Number, as well as the information you would like to have updated.

Your ETFO Member ID Number is located on your ETFO membership card (i.e., the white card with the red apple). 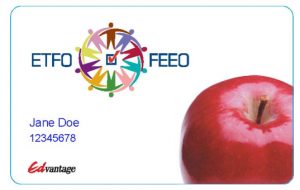 Several Ontario school boards are planning to continue offering virtual learning next year, forging ahead before provincial direction is set, and saying it’s now more about a different mode of learning rather than a pandemic...
Millie Burgess says she spent much of her career relishing telling strangers she had 20 children and watching their jaws drop. Burgess, 99, wasn’t their mother. She was an elementary school teacher who considered the children she taught each...
As we begin Black History Month 2023, the Elementary Teachers’ Federation of Ontario (ETFO) reaffirms its solidarity with the United Nations in demanding the protection of human rights of people of African descent. Black History...
Ontario’s four teachers’ unions have been without a contract since last August, and it appears they are nowhere closer to reaching a deal with the Ford government. Barb Dobrowolski, President of the Ontario English Catholic...
Ontario’s teachers’ unions are warning the Ford government that they are ready to “mobilize” if the province imposes a contract on educators or uses the notwithstanding clause to settle any bargaining dispute. The four unions representing the province’s teachers are...