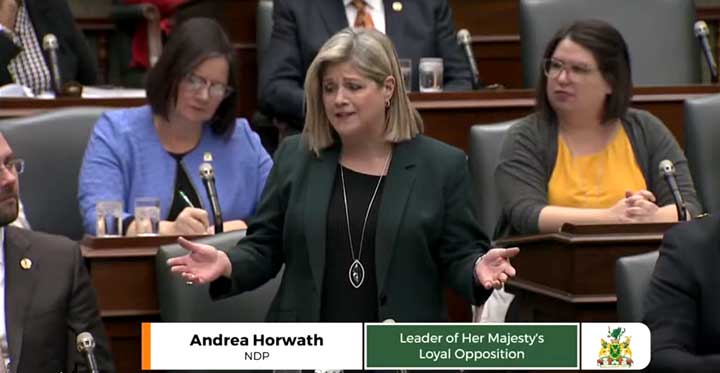 Ontario NDP Leader Andrea Horwath asks a question in the legislature to Premier Doug Ford on April 15. Ford answered that teachers were “so happy” with the education cutbacks in his government’s budget.

Premier Doug Ford says he has spoken with “hundreds of teachers over the last few weeks” who are “so happy” with the province’s education cutbacks.

As dozens of educators looked on from the spectators’ gallery and barely a week after 30,000 demonstrated at the legislature building, Ford deflected questions from NDP Leader Andrea Horwath about what the cuts would mean to children in the classroom.

“School boards everywhere are warning of jam-packed classes, fewer course choices and fewer teachers and education workers,” Horwath said. “Just on Friday, we learned from school boards in Hamilton, Windsor, Guelph and Waterloo that have sent out 300 redundancy notices to teachers, and the school board in the education minister’s own riding says … that smaller schools will struggle to provide not only specialized classes but ‘even the core curriculum required to graduate.'”

“What the Premier probably should do is go back to school to learn that when you’re funding below the rate of inflation, that, in fact, means a cut,” said Horwath. “That means a cut.”

You can read the entire exchange in the section on “Oral Questions” at this link.