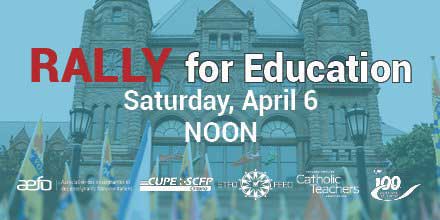 The following is a joint statement issued April 3 by ETFO, AEFO, CUPE, OECTA and OSSTF.

Teachers and education workers in Ontario have formed a common front to defend a strong publicly funded education system that is of high quality and accessible to all.

With a united voice, five unions representing workers in every school board in Ontario have declared jointly that, “the cuts being made to the education budget will have devastating effects on student well-being and achievement.”

Collectively the unions urged the government to re-think plans proposed for education in Ontario, including: increasing class size, introducing mandatory e-learning and cutting funding to vital programs for student supports in schools.

The joint statement outlined common values and solidified a commitment to work together to ensure the following seven principles:

As the largest representatives of educators and education workers in Ontario, the five signatories are: the Association des enseignantes et des enseignants franco-ontariens (AEFO), the Canadian Union of Public Employees – Ontario (CUPE), the Elementary Teachers’ Federation of Ontario (ETFO), the Ontario English Catholic Teachers’ Association (OECTA), and the Ontario Secondary School Teachers’ Federation (OSSTF). The joint statement was a combined effort to express unity across the education sector that puts the needs of students first. The full statement is available online here: https://shar.es/amI3mb.

As a first act of unity, this common front has organized a public Rally for Education this Saturday, April 6 from noon to 2 p.m.at Queen’s Park. The rally, held in advance of the provincial budget, will call upon the government to make investments, not cuts, to publicly funded education.

All of the organizations expressed that this is an important time to come together to defend high-quality, publicly funded education in Ontario. “Together, we are sending a united message to the Ford government to stop the cuts to education.”