From raising child/caregiver ratios for home child care providers to contemplating larger classes in elementary schools, the Ontario government is moving quickly to sacrifice the safety and well-being of our youngest children to save money, according to the Elementary Teachers’ Federation of Ontario (ETFO). 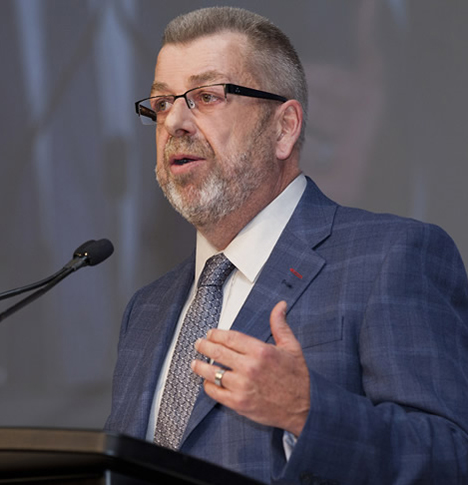 ETFO President Sam Hammond: “The government must not sacrifice an optimal environment for students to grow and learn for short term financial benefit.” (Photo: Kathryn Gaitens)

As a long-time advocate for publicly funded, high quality child care, ETFO is concerned that child/caregiver ratios are being increased for home care providers. The government’s bill undoes previous regulations put in place after the death of a child in a home day care.

“The rush to save money at the expense of children is further evident in the recently announced consultation on class size. This government needs to remember that its focus is people and building a future for all students, not cutting and decimating our world-renowned publicly funded public education system.”

“Our members tell us that when children are placed in crowded, large classes, they become anxious, they act out and it is harder to manage these classrooms. It is more difficult for educators to provide the one-on-one instruction that all students need and deserve. For all these reasons, having 32 to 35 students in a classroom can jeopardize their safety no matter how diligent the educator is in managing such a crowded room.”

“ETFO is also concerned about the Minister’s remarks regarding the future of full-day Kindergarten beyond next year. Studies have shown that the current model in Ontario has significant academic and social benefits for children over the longer term.”

“From day care through Kindergarten and primary grades, the government must not sacrifice an optimal environment for students to grow and learn for short term financial benefit. Their future is too important to make cuts when other revenue tools are available to the government to balance the books.”